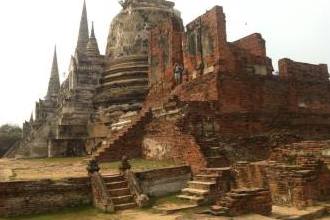 While traveling in Thailand, you’ve experienced what every tourist has seen – the islands, beaches and the big cities. If you’re looking for the ancient ruins and the ancient cities of Thailand then look no further. Here’s a list of hidden provinces that ranges from northern Thailand, all the way down to the southern/central areas.

This ancient city is filled with old temples and ruins that were destroyed by the Burmese army in 1767. These temples display statues of headless Buddhas that were destroyed and now form part of this Historical Park. It has been a UNESCO Heritage Site for over 20 years. Ayutthaya is approximately an hour and a half from Bangkok, by bus or van. Upon your arrival, there are songtaos and tuk tuks waiting to be your private tour guide. Usual asking price is 100 – 200 baht per person for about 3 hours. Some of the temples are free to enter but some of the major temples costs no more than 50 baht as an entrance fee. Ayutthaya has everything from temples, ancient ruins, pagoda, a floating market and a non-profit Elephant Park. At the Elephant Park, you can live with and care for the elephants.

Kanchanaburi is another ancient city, west of Bangkok and borders Myanmar (Burma). Kanchanaburi is the home of the Bridge over the River Kwai, which is known for the start of World War II and the Death Railway. There are many historical sites (besides temples). It is filled with war cemeteries, war monuments and museums. Besides these national monuments, Kanchanaburi boasts a few waterfalls and national parks. Erawan National Park is a 7-tiered waterfall and costs about 200 baht entrance fee. There are plenty of elephant’s camps in this city. The non-profit camp is called Elephant World. They don’t believe in tying the animals down, so you have free-roaming elephants that has a personal trainer by its side. Kanchanaburi is approximately 2 to 3 hours from Bangkok, by bus or van. It has often been described as “little Chiang Mai”.

Phayao is 3 hours away from Chiang Mai and 2 hours from Chiang Rai. The mountain passes boasts beautiful waterfalls, rice fields and hiking paths. Phayao is known for the massive lake that overlooks the mountain between Phayao and Lampang. In the middle of Phayao Lake, you can see a sunken temple (Wat Tilok Aram). There are boats for hire and you can take them to see the sunken temple or go fishing. The natural beauty in Phayao is amazing, over the lake and through the mountain valleys. You’ll fall in love with this small little town.

Nan is one of the best towns in northern Thailand, borders Laos. It boasts many artsy temples, galleries and beautiful mountains. If you love temples, this is the city for you. In the space of one block, there are about 5 temples opposite each other. Each temple has distinctive architecture and meaning behind them. The city has a museum of Nan’s history, architecture and archaeology. The remains of Nan’s old city wall, which was destroyed in the war, can still be seen. Nan has many markets where handicrafts are quite popular. Handmade crafts that are made from authentic Thai silk can be found at these markets.

Sakon Nakhon is in the northeast of Thailand, near the border of Laos. This ancient city hosts many temples, hiking paths and waterfalls. It is home to a massive national park, Phu Pan. This national park is covered with beautiful waterfalls and hiking trails. Nong Han is a massive lake on the outside of the city and every year they have boat-racing festivals. In Sakon Nakhon, an Esaan region of Thailand, the people speak a mixture of Thai and Laos. Esaan food is probably some of the tastiest Thai food and this region is known for it’s delicious Somtam.

Do Your TEFL Certification In Thailand
May 26, 2017

How To Optimise Your Chance Of Landing A Job In Thailand?
April 30, 2017

Some Advantages Of Teaching Abroad
March 31, 2017

TESOL Is Your Gateway To Great Career
February 28, 2017